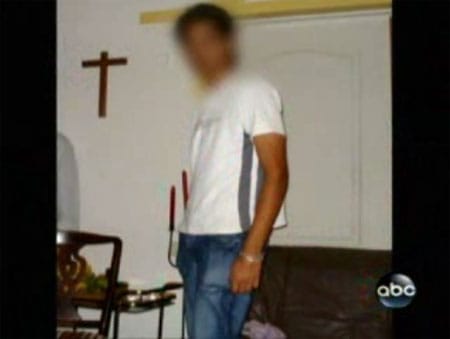 19-year-old Iranian Mehdi Kazemi is being held in detention in The Netherlands while a Dutch court deliberates whether or not it is legal for asylum to be sought in two European countries. Kazemi’s request for asylum in the UK was turned down in 2006 after British authorities determined that Iran is a country that does not systematically persecute gays. But that’s because Iran does not recognize homosexuality.

ABC reports: “While studying English and science in the U.K., Kazemi learned that his boyfriend had been executed for sodomy back in Iran. His father told him the boyfriend had confessed to Iranian authorities that Kazemi was his lover. The authorities, Kazemi found out, had already been to his parents’ house with a warrant for his arrest. ‘I was very scared,’ Kazemi wrote in a letter accompanying his request for asylum in Britain and published in full on the website of the Canada-based Iranian Queer Organization. ‘I wish to inform secretary of state that I did not come to the UK to claim asylum … But in the past few months my situation back home has changed. The Iranian authorities have found out that I am a homosexual and they are looking for me.’ He continued, ‘I can not stop my attraction to men … If I return to Iran I will be arrested and executed like [my boyfriend]. Since this incident … I have been so scared.'”

The Netherlands may decide to send Kazemi back to the UK, where his fate is again up in the air.

See the clip as well as another report from Sky News, AFTER THE JUMP…

And here’s a report from Sky News:

Mehdi Kazemi, United Kingdom Is a Danger for All Refugees
by GWB-