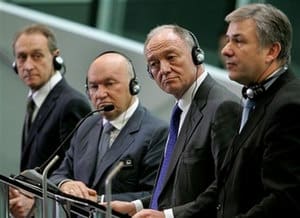 “In a letter to the three Mayors, Nikolai Baev and Nikolai Alekseev point out that in Russia gay men and women face enormous difficulties in publicly expressing themselves. ‘You always support the fundamental right of homosexual people to openly manifest and to publicly express themselves,’ they say in their letter to the city halls. ‘All of you also regularly take part in Gay Pride parades in your own cities.’ They go on to say that the constitutional right to freedom of assembly has been violated in the previous two years when Gay Pride Parades have been scheduled, only to be banned by Mayor Yuri Luzhkov. ‘Taking into account the bans of the public Pride events in the Russian capital in 2006 and 2007, we are not sure that Mayor Luzhkov will permit Gay Pride manifestation this year,’ they point out. ‘Please take part in our conference and rally,’ the organisers ask.”

The photo of the three mayors above, with Moscow Mayor Yuri Luzhkov, was taken at a mayoral summit in London in February 2007.