Jason Hair-Wynn, a gay Massachusetts man who married his partner in 2005 and legally changed his name to add his partner’s, must change it back to his old name, Jason Hair, if he wants a passport says the State Department. 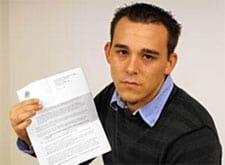 According to the Sun Chronicle, the State Department says the Defense of Marriage Act (DOMA) prohibits them from recognizing his married name: “‘We are unable to comply with your request for a name change based on the documentation you sent because of the Defense of Marriage Act …,’ the letter states. ‘In determining the meaning of any Act of Congress, or of any ruling, regulation, or interpretation of the various administration bureaus and agencies of the United States, the word ‘marriage’ means only a legal union between one man and one woman as husband and wife, and the word ‘spouse’ refers only to a person of the opposite sex who is a husband or a wife.'”

Hair-Wynn applied for the passport so he could go to Ghana and work at orphanages educating children about HIV and AIDS. He says he’s changing his name back so he can go.