Christopher Rants, a GOP legislator from Sioux City, Iowa, will dust off “a rarely used House rule” to try and force debate on same-sex marriage, the Des Moines Register reports: 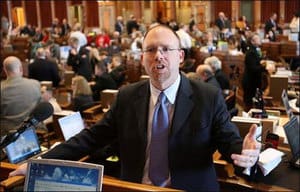 “Leaders of the Democratic majority have resisted debate on House Joint Resolution 8, which would begin the process of amending the Iowa Constitution to define marriage as between one man and one woman. The issue is before the Iowa Supreme Court, and a Statehouse debate on it would subvert the judicial process, the Democratic leaders have said…A proposal to amend the constitution is stuck in the House Judiciary Committee. If it fails to advance out of the committee this week, it will not be eligible for debate this session. Under a separate legislative rule, however, a lawmaker can ask to move a proposal out of committee in order to make it eligible for debate. Rants said Monday that he would use that rule to try to keep the proposal alive. If Rants can find at least 51 votes in support of his plan, HJR 8 would be eligible for debate by the full House. The action wouldn’t guarantee floor debate, but it would keep the resolution alive past Friday’s deadline concerning eligibility for debate.”

Ranted Rants: “We have to do it now, or this issue is done. We’re going to see gay marriages take place in Iowa. Iowa’s going to be sort of the Las Vegas of America, because we have no residency requirement and we’ll have people from all across the country coming to Iowa to get married.”

UPDATE: Rants attempt to force debate FAILS: “The House rejected the move, voting along party lines — 50 Democrats against and 46 Republicans in favor. Four House members were absent or not voting, including three Democrats.”