A group of British soldiers training in Norway has been sent home after their not-so-private game of “naked bar” was photographed and reported in the national media. 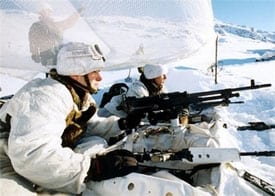 The Daily Mail reports: “The rules are simple – participants immediately remove all clothing – and the game is usually tolerated among high-spirited troops when it is played well away from the public gaze. In this case, however, the soldiers began urinating on one of their party who had slumped drunkenly to the floor, splashing urine over the bar’s furniture and other customers. Local police were called, and handed spot fines of £500 to each of the men before handing them over to the Royal Military Police. Harstad police spokesman Gair Pedersen said: ‘They were drunk and there was a problem in the bar but we are quite used to dealing with British soldiers like this.’ Norway’s biggest newspaper, Aftenposten, quoted locals as saying the soldiers had been ‘bothering’ female customers. One, Cecilie Kleppe, 29, said: ‘Some of them even started waving their private parts at the other guests. Two of the Englishmen urinated on a fellow soldier who was lying on the floor. It was disgusting.’ Bar manager Petter Holmbakken said he had never seen anything like it.”

The soldiers are reportedly training for a tour of duty in Afghanistan. 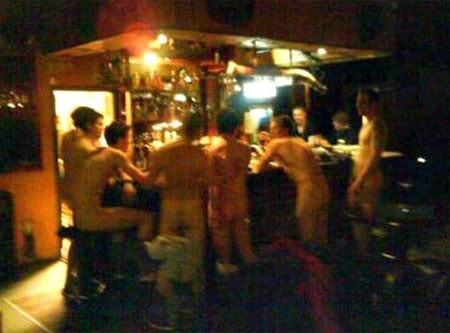 The British troops play a game of ‘naked bar’ in Norway.

In related news, this morning on Good Morning America, Chris Cuomo said that Prince Harry was sent to Afghanistan rather than William, because Harry is “expendable”.

In other news, a U.S. Marine based out of Hawaii is being investigated after a sick, graphic video appeared on YouTube showing the soldier throwing a puppy off a cliff into a steep ravine.

Said the Kane’ohe Bay base in a release: “The video is shocking and deplorable and is contrary to the high standards we expect of every Marine. We do not tolerate this type of behavior and will take appropriate action.”

I’m not going to link to the video, but the Honolulu Advertiser provides an accurate description.

“Two Marines are seen in combat gear smiling as one holds a white-and-black puppy by the scruff of its neck. The dog seems to be about 8 weeks old and is motionless as it is held. ‘Cute little puppy, huh?’ says one Marine as he smiles broadly. ‘Oh so cute, so cute, little puppy,’ says another in a child-like voice. The Marine holding the puppy is then seen throwing the animal overhand into a desert-like gully below. The animal yelps until it thuds to the ground at the bottom of the gully. ‘That’s mean,’ one Marine says afterward.”