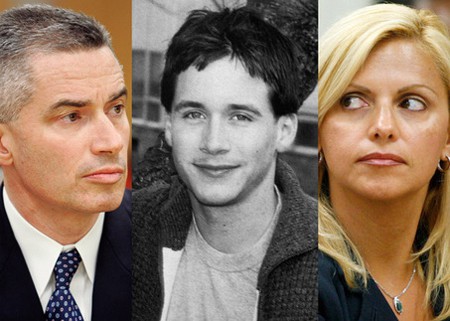 While it’s hard to believe that the McGreeveys are still quarreling over their divorce proceedings, it’s even harder to believe there are still bombshells of this magnitude left to drop.

Former aide Theodore Pedersen, who was a driver and traveling aide for the former governor, told the New Jersey Star-Ledger that he had regular sexual affairs with the couple, or, as he told the New York Post, “The ‘intense’ end-of-the-work-week escapades, he said, usually began with a ‘couple of drinks’ at a local T.G.I. Fridays and culminated in ‘a hard-core consensual sex org’ among the three of them at McGreevey’s Woodbridge condo.

According to the Star-Ledger, “The aide, Theodore Pedersen, said he and the couple even had a nickname for the weekly romps, from 1999 to 2001… They called them ‘Friday Night Specials,’ according to Pedersen. He said he wanted to refute the innocent image that Matos McGreevey has projected – both during the couple’s ongoing divorce battle and in interviews she gave after New York Gov. Eliot Spitzer resigned last week in a sex scandal. He said he was also incensed by her portrayal of herself as an unsuspecting wife in her book: ‘Silent Partner: A Memoir of My Marriage.’“

Said Pedersen: “I wanted to get this out now because it was so offensive to me that she goes on television playing the victim. She’s trying to make this a payday for herself. She should have told the truth about the three of us.”

Pedersen, who is 29 and lives with his girlfriend, said that the Friday night flings were the only contact he had with Dina, and he was never positive if the governor was gay or not:

“I had heard the rumors in circles outside of work (that McGreevey was gay)…In hindsight, there might have been light interest (in me), but it didn’t seem like he was gay. It did enhance their sexual relationship having me be a part of it.”

Pedersen told the New York Post: “He liked watching me, and she would watch me while she was [performing sex acts] with Jim…It’s frustrating to hear her call Gov. Spitzer a hypocrite while she’s out there being as dishonest as anyone could be about her own life. She’s framed herself as a victim – yet she was a willing participant, she had complete control over what happened in her relationship. She was there, she knew what was happening, she made the moves. We all did. It’s disgusting to watch her play the victim card.”

Dina Matos McGreevey has claimed that she did not have any clue about her former husband’s sexual preference until his announcement “I am a gay American” in August 2004. Mc Greevey filed papers in April 2007 saying that his wife knew he was gay a full four years before that announcement. The paper adds: “A trial before Union County Superior Court Judge Karen Cassidy is scheduled to start in May. Pedersen could be among the first witnesses to testify.”

Previous Post: « Rearview Mirror: Looking Back at the Week on Towleroad
Next Post: One Big Happy R Family »