A Senate candidate running for Larry Craig’s seat in Idaho is so adamant about his anti-abortion stance that he legally changed his name to “Pro Life” and will appear on the ballot that way, the AP reports: 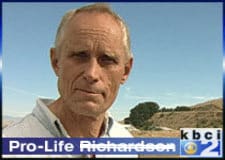 “As Marvin Pro-Life Richardson, the organic strawberry farmer from Letha, 30 miles northwest of Boise, was denied the use of his middle name when he ran unsuccessfully for governor in 2006 because the state’s policy bars the use of slogans on the ballot. Now, though, officials in the Idaho secretary of state’s office say they have no choice because Pro-Life is his full and only name. He says he will run for the highest state office on the ballot every two years for the rest of his life, advocating murder charges for doctors who perform abortions and for women who obtain the procedure. ‘I think it’s just and I think it’s proper to have Pro-Life on the ballot,’ he told the Idaho Press-Tribune of Nampa. ‘If I save one baby’s life, it’s worth it.'”

Craig is, of course, not running for reelection following his Minneapolis men’s room arrest. He could, I suppose, legally change his name to ‘I’m Not Gay’ and run as that person.

AFTER THE JUMP, an older news clip on Pro Life…