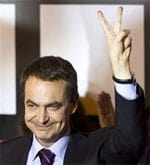 “The Popular Party conceded defeat, but took consolation in the fact that their party also picked up seats. But both the El Pais and El Mundo newspapers said the result could lead to Rajoy’s resignation as party leader given that it was his second consecutive electoral defeat against Zapatero. The results were a firm endorsement of Zapatero’s policies, which included reforms such as legalizing gay marriage and granting on-demand divorce, once thought unthinkable in the overwhelmingly Roman Catholic country.”

Previous Post: « Towleroad Guide to the Tube #256
Next Post: An Update on the Anti-Gay Sally Kern Saga »