Bill O’Reilly and Wayne Besen of “ex-gay” watchdog organization Truth Wins Out (which, incidentally, just relaunched its spiffy new website) had a chat last night about the Jay Leno “gayest look” controversy. Here’s a bit of their conversation 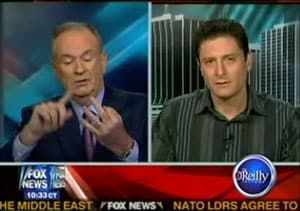 BESEN: “I don’t think it is true. I think if you look at comedy acts there’s a lot of groups being made fun of. I think there’s a big difference between making fun of something they do that is funny and making fun of who they are as individuals. The simple act of being Black is rarely made fun of, but being gay is perfectly acceptable. It’s a double standard.”

O’REILLY: “No I don’t think so. Believe me Mr. Besen, I do this every night. I would never at this point, poke fun at any minority group ever, because it is not going to be taken in the same way, someone is going to be offended, and they’re going to brand you a racist or a homophobe.”

Previous Post: « Kern at 1000-Strong ‘Rally for Sally’: This is Not About Me
Next Post: It’s Baseball Season and Justin Timberlake is a Swinger »