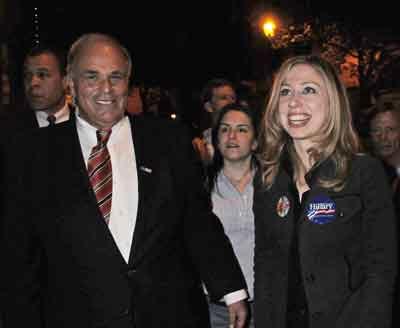 Chelsea Clinton extended her tour of gay America over the weekend, stopping in at four bars in Philadelphia’s Center City neighborhood, where her rear end discovered that the City of Brotherly Love was the city of Sisterly Love as well: 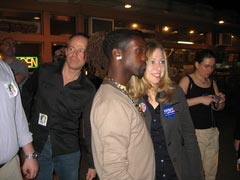 “Led around the neighborhood by Gov. Ed Rendell, Chelsea was mobbed by local gays and lesbians, as she walked from one club to the next. They ran up to hug her, posed for pictures and certainly invaded her personal space. ‘I grabbed her ass,’ one young woman exclaimed to her friends after snapping a picture with her arm around the former first daughter. ‘Chelsea, the gays love you!’ one fan exclaimed, as she took the microphone at Bump, a restaurant and bar that was her first stop. ‘Oh, gosh, I don’t know if everybody loves me,’ she responded. Most of those at the bar seemed to, squeezing past one another in the cramped space to get a photo. Even some patrons, donning Obama stickers — a rally for the Illinois senator had taken place a few blocks away earlier in the evening — tried to get a snapshot as well. In all, she visited four bars in Center City, concluding her tour at Woody’s, the city’s most famous gay bar. Getting from one event to another proved difficult at times, as she was constantly stopped by admirers while walking down the sidewalk.”

Said Rendell of their final stop at Woody’s: “This is where the voters are…We’ll see 1,500 people tonight easily and they’re all voters. These are important voters, they’re smart, they’re sophisticated and they turn out in large numbers and always have.”