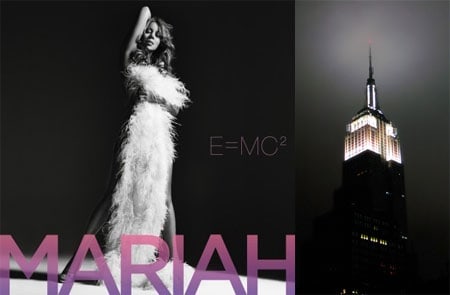 Hey New Yorkers, if you look up at the Empire State Building this weekend and wonder why it’s lit in pink, lavender, and white, it’s because the largest phallus in New York state is honoring…Mariah Carey.

According to a press release, that’s apparently the color ‘motif’ of the new album E=MC² and she’s going to be at a ceremony tomorrow at 1 pm at the building where she’s going to flip the switch on a scale model of the building that I guess will light up and, I don’t know, play Touch My Body or something.

Previous Post: « Obamacrombie: The Latest in Campaign Fashion
Next Post: ‘Day of Silence’ Met with Protests, Solidarity in Rural Washington »