San Francisco Mayor Gavin Newsom played a key role in the final decision to place a bust of Harvey Milk in the City Hall rotunda rather than in the north mezzanine which one critic dubbed “semi-Siberia.” 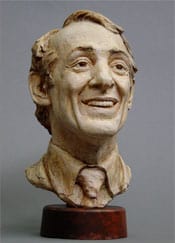 The bust, which will be unveiled on May 22 (which would have been Milk’s 78th birthday), will sit permanently in the ceremonial rotunda atop the grand staircase.

According to the Bay Area Reporter, “The decision caps a months-long fight over where the memorial to the history-making lawmaker should be placed inside City Hall that sounds like a microcosm of the political haggling the landmark has long played home to since it opened in 1915. The actors this time included everyone from Milk’s friends, members of several obscure city committees, the artists commissioned to create the bust, a granddaughter of a former mayor, and ultimately intervention by Mayor Gavin Newsom. ‘This bust has been traveling around City Hall like you wouldn’t believe,’ quipped Joey Cain, co-chair of the Harvey Milk City Hall Memorial Committee. Cain said the committee wanted the bust to be in the rotunda. During Milk’s time in office, noted Cain, Milk never rode the elevator to the second floor. Instead, he walked up the grand staircase every time. ‘Harvey has a quote – I don’t know the exact wording of – in which he said when gay people walk into City Hall, they should walk right up those stairs to let people know they are here,’ said Cain. ‘Putting it outside the entrance to the Board of Supervisors’ chamber in this rotunda has great symbolic significance.”

Newsom finally interceded and ordered the bust put in the rotunda. It will sit a few feet away from the Supervisors chamber and just down the hall from the office where Dan White shot and killed Milk in 1978.