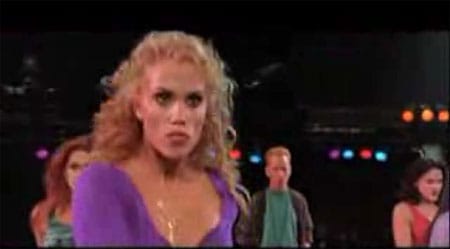 Choreographer Jerry Mitchell talks to AfterElton about his role as co-host of Bravo’s new reality dance show Step It Up & Dance. Mitchell’s co-host is Elizabeth Berkley, whose role as Nomi Malone rates as one of the great (unintentionally) camp performances of all time. Mitchell tells AE that Elizabeth “looooves that she was in that movie” and that it took the contestants on Step Up only a split second before they honored her for it. 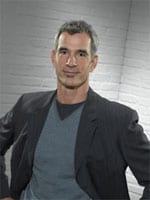 Says Mitchell: “Elizabeth has always been a dancer. She studied dance and she still does dance. I knew that about her. We both grew up in the Detroit area, but we didn’t really know each other before this. And I was a huge fan of Showgirls — as is everyone. I said to her the very first day we were shooting, ‘I want to time how long it takes until one of these dancers does that fabulous Nomi move where they flick their fingers in front of their face.’ And, of course, the moment we walk out in the first episode… She did it because they did it. We came out and the dancers all went, ‘Oh my God! Nomi!’ and then — ‘Whoosh!’ they all did the move. It took a total of about seven seconds. But you know, that movie spoke to dancers in a camp way, but also in a very realistic way about what can happen in your career, the different types of dance you can get involved in and the cutthroat world it is. So, in a melodramatic way, it’s true.”

AFTER THE JUMP, a flashback clip of Nomi’s first rehearsal…

And here’s the show preview: