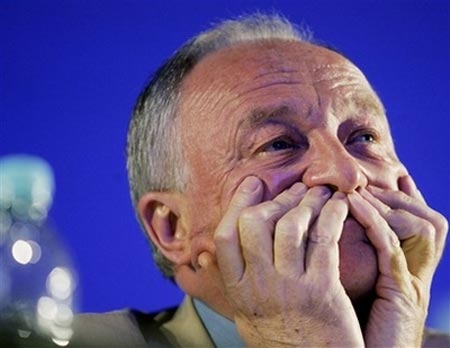 London Mayor Ken Livingstone (above), Boris Johnson (below), and other mayoral candidates appeared over the weekend at an event organized by UK group Stonewall at which they campaigned and addressed concerns of gay voters. Livingstone made a splash by unveiling an LGBT Manifesto, designed, he said, to make London the most gay-friendly city in the world. 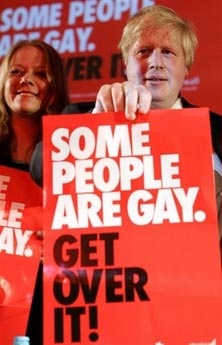 Said Livingstone: “As Mayor, and throughout my political career, I have promoted rights for lesbians and gay men. If re-elected in May I will work to ensure that London retains its reputation as a welcoming and safe place for lesbian and gay Londoners and visitors. London is undoubtedly one of the great lesbian and gay capitals of the world and I want London to continue to celebrate lesbian and gay culture in all its aspects. For many, London is a city that allows people personal freedom to express culture and live their lives in peace and as they choose. People come here to be free. I made one of my first political acts as Mayor the creation of the London Partnerships Register – to assert that lesbian and gay people should be fully recognised by the state. I have been delighted by how many same-sex couples have used the register and the role the register has played in convincing the Government to introduce the Civil Partnerships Act. I am determined to continue to use the full extent of my powers as Mayor to oppose homophobia and deliver for lesbian and gay equality.”

At the event, Livingstone called on Johnson to apologize for insulting gays and lesbians. Johnson has said, among other things, “If gay marriage was OK – and I was uncertain on the issue – then I saw no reason in principle why a union should not be consecrated between three men, as well as two men; or indeed three men and a dog.”

Johnson refused to apologize, but said “I am in favour of liberty.” He added, on the topic of anti-gay discrimination, “When I look at London buses, I don’t see lesbian buses or gay buses, or black or white buses – I just see buses.”

Read the main pledges of Livingstone’s manifesto, AFTER THE JUMP…

• Using the full extent of mypowers as Mayor to continue to promote and deliver lesbian and gay equality – in all areas of life: at work, in access to services, in social and public life, and in the law.

• Using my powers as Mayorto lobby for the law tofully protect against discrimination: I will work with central government with the aim of ensuring that the Single Equality Act will fully protect all lesbian and gay people at work and that service provision is equal and appropriate. I am arguing for the law to be more
proactive and to be monitored and enforced.

• Working with schools, boroughs and othersto stamp out homophobic bullying in schools: I will work with boroughs and community organisations to take forward anti-bullying policies and aim to ensure that teachers are aware of and combat homophobic bullying. The legacy of Section 28 – introduced and maintained by previous Conservative governments – lingers on. I am determined to build on the work I have already undertaken to ensure all young people are equally respected at school. I will continue to promote LGBT History Month across London, including in schools.

• Driving forwardequality inservice provision to London’s LGBT communities:I will work with public authorities across London with the aim of ensuring that services are always provided in a way that fully upholds and extends to the limit of the law rights under anti-discrimination legislation. I will aim to build up a comprehensive picture of service provision, with the aim of ensuring that all London’s LGBT communities, in their full diversity, are getting the health, social services, housing, education, training and other services they need.

• Dealing with HIV andAIDS: I will continue to lobby forHIVpreventionmeasures,treatment and support service funding tailored to meet the specific needs of London’s LGBT communities.

• Working with employers and equality organisations to stamp out homophobia in the workplace: many people still feel unable to be ‘out’ at work due to fears of discrimination. I will promote best practice to all employers in London to encourage greater equality, as well as working to improve rights in law.

• Continuing to support and resource Pride as a central London free event
for all: Pride’s celebration of equality should be seen and embraced by the widest
number of people possible, and remain at the heart of the city where it belongs.
I want to see Pride built into a major world class event to rival other great Pride
celebrations across the world.

• Working with LGBT community projects: I will continue to work with LGBT
community organisations, campaigns and consult communities and organisations
on my policies and strategies.

• Delivering support for London’s lesbian and gay culture: Cultural events
like the Lesbian and Gay Film Festival are very successful and important for the
entire city and I am delighted to have been able to work with the festival and
look forward to doing so in future. In 2009 the international lesbian and the gay
choral festival Various Voices will be in London and I will be delighted to welcome
and promote it.

• Support the development of the LGBT Museum: I look forward to continued
work with Proud Heritage as plans for the LGBT Museum continue to develop.
I also would continue to encourage ongoing work by London’s existing cultural
institutions to engage with and integrate LGBT history into their everyday work.

• Supporting equality in housing: I will use my housing powers to aim to ensure
gay Londoners get a fair share of affordable housing and lifetime homes.

• Young people: I will make sure that young lesbian and gay Londoners are
included in all consultations and covered in provisions of my policies and strategies
for young people and youth provision.

• Continuing to work with London trans communities and back trans
people’s rights to equal treatment: I have supported the extension of
legislation to protect against discrimination in the exercise of public functions. In
my submissions to the Discrimination Law Review I have also called on
government to broaden support for trans people against discrimination by
widening the definition of trans in law.

• Supporting equal opportunities in employment: I will do everything in the
Mayor’s powers to continue to extend equal opportunities to all LGBT Londoners.
My Responsible Procurement policy is a national example in binding private sector
providers to the high equality standards of the GLA and I will continue to develop
and extend that policy, including ensuring compliance with anti-discrimination
legislation on sexual orientation. I have called on government to introduce an
mandatory equality duty on procurement.

• Olympic equality: I will make work with the Olympic bodies with the objective
that LGBT Londoners get an equal opportunity to participate in and benefit
from all aspects of the 2012 London Olympics including sport, cultural activities,
volunteering, training, business, employment and economic development.

• Keeping the Greater London Authority being the top gay-friendly
public sector employer in the UK: I have implemented policies across the GLA
to ensure a positive workplace environment on lesbian and gay equality and that
equal opportunities and rights at work are paramount. My policies so far have put
the Greater London Authority at the top of the Stonewall league table of good
lesbian and gay public sector employers.

• Continuing to deliver the policies needed to ensure London is a safe
city for LGBT communities: I will continue to encourage the Metropolitan Police
to make tackling and responding to hate crime a major priority and I will
encourage the establishment of Hate Crime Reporting Centres in gay friendly
venues and community centres across London, to maximize the ease with which
the LGBT community can report hate crimes.