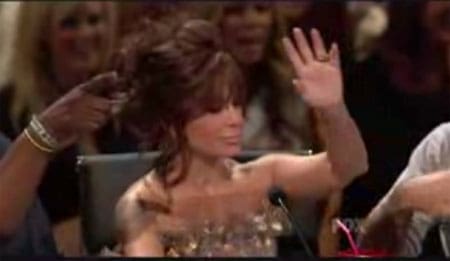 Imho, the only moment from last night’s American Idol worth repeating.

She must be taking psychic pills now!

For those of you who missed it, Paula proceeded to critique Jason Castro on both his performances even though the contestants had only done one song.

Abdul told The Insider: “It got very confusing … the producers come up to us in the dark and said, ‘We are not going to have you guys judge after each performer, we are going to have all the performers go once, then twice and at the end critique them.’ I am feverishly trying to write notes for every performance…I was trying to give my critique for Jason Castro, and scribbled Jason’s name, and that was David Cook’s! … We all just screwed up everything. This is live television. This is fun!”