PFLAG today released recordings of their full 40-minute meeting with Oklahoma State Rep. Sally Kern. Listen to PART ONE, above. Kern met with the group in late March in response to controversy, which is still ongoing, surrounding her remarks that gays are a worse threat to the nation than terrorists. 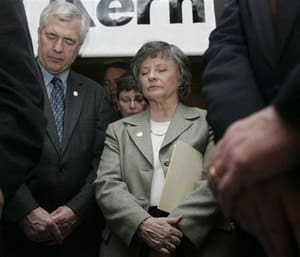 Following their meeting with Kern, PFLAG reported that Kern said that she agrees that gays and lesbians should not be fired from their jobs because of their sexual orientation. Later, Kern said that her views were misrepresented.

Said Kern to the Oklahoman after the meeting: “I unequivocally do not support sexual orientation laws.”While I do not advocate employers going on a witch hunt to fire homosexual employees who are performing their jobs in a manner just like any heterosexual employee, I do not support laws that would force employers to check their First Amendment rights to freedom of religion, speech, and association at the workplace door.”

PFLAG disagrees, and says the tapes tell a different story:

“As the full 40-minute audio recording released this morning by PFLAG proves, Kern said not once (at about 15 minutes and 30 seconds in) that she does not believe GLBT people should be fired from their jobs . . . but she said it twice (again at about 33:15), confirming her stance when Rev. Kelly McCallie recaps the meeting near its end. And, when asked by Rev. Newton-Edwards if she would consider attending future PFLAG meetings to hear from other families in her district, Kern says – almost joyfully – ‘maybe.’ She even says – when asked if she and her husband will join a PFLAG supporter for dinner – ‘Sure!’ In fact, if you look at PFLAG’s characterization of the meeting last week, and Kern’s version of the encounter in the local press, there is no question that Sally flat-out lied to reporters.”

From the Office of Sally Kern [pflag]