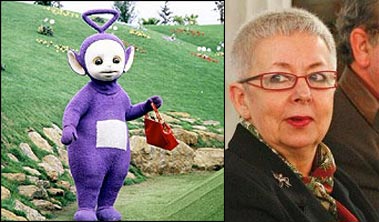 Ewa Sowinska, the head of Poland’s national watchdog for children’s rights, who last May launched an official investigation into Teletubbie Tinky Winky after noting the character’s “homosexual undertones,” has resigned:

“Speaker Bronislaw Komorowski said Tuesday that the national ombudsman for children’s rights Ewa Sowinska will leave office June 30. He gave no reason for her decision…Sowinska was a member of the militantly anti-gay and anti-abortion League of Polish Families. The party was a junior coalition partner in Poland’s previous government but lost its seats in parliament in an election last year.”

She later backed off her investigation, issuing this statement from a spokesperson: “They are fictional characters, they have nothing to do with reality, and the bag and scissors and other props the fictional characters use are there to create a fictional world that speaks to children. We are not going to deal with this issue any more.”