Rex Wockner spent some time yesterday at the Log Cabin Republicans National Convention and reports on San Diego Mayor Jerry Sanders’ appearance there. Sanders, you may remember, surprised voters by reversing his position on civil unions and endorsing gay marriage at a press conference last September (video AFTER THE JUMP). 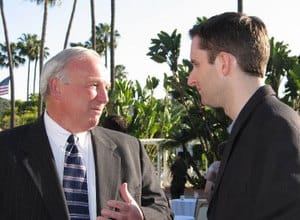 The San Diego Union Tribune also reported on the gathering: “Sanders did not broach the gay marriage issue in his brief remarks at the Town and Country Resort and Convention Center in Mission Valley, choosing to use the occasion for a stump speech for his re-election. But immediately after he left, organization president Patrick Sammon told the delegates that Sanders had taken a stand for ‘marriage equality.’ Following his change of heart last year, Sanders signed a resolution from the City Council in support of same-sex marriage in a case being decided by the state Supreme Court. ‘The mayor took a courageous stand and signed that resolution,’ Sammon said to wild applause. ‘He could have vetoed it.’ Same-sex marriage is a polarizing issue within the Republican Party and in the San Diego mayor’s race. Republican Steve Francis, Sanders’ chief rival in the June 3 election, said he would have vetoed the resolution. He is opposed to same-sex marriage and instead favors civil unions.”

Said Sanders, according to Wockner: “I’m proud of the political opportunity that this brings in terms the interaction and the issues and the people you’re bringing here. I understand Gov. Schwarzenegger and [former U.N. Ambassador] Bolton are coming in tomorrow and I think that really tells you how important all of these issues are to all of us and how important the Republican Party — how important Log Cabin Republicans are to the whole process.”

Wockner talked to LCR President Patrick Sammon about Arnold Schwarzenegger and John McCain, and said that the group is likely to vote to endorse McCain during the convention.

Said Sammon: “We’re pleased he was nominated. Our posture during this campaign was stopping Mitt Romney. We’re proud of the role we played with our ad campaign and, you know, Sen. McCain, we endorsed him in his Senate re-election in 2004; in 2000 a lot of our members were very supportive of his campaign, and certainly this time as well. We know he’s someone who’s an inclusive Republican who understands the party needs to get back to its core principles and we are excited about the campaign ahead.”

Photo above by Rex Wockner. More at his blog.

AFTER THE JUMP, Jerry Sanders’ press conference from last September…

Previous Post: « Dolly Parton Sends Bald Eagle Back to Nature
Next Post: One is the Face of Commitment, The Other a One Night Stand »