Hoping that a measure on this November’s ballot constitutionally banning same-sex marriage might be approved by voters, groups who fought the recent lawsuit resulting in the legalization of same-sex marriage have filed papers asking the court to suspend any unions until after the election: 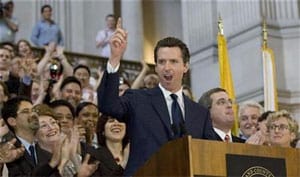 “The organizations, including the Proposition 22 Legal Defense Fund and the Alliance Defense Fund, filed a request with the court Thursday afternoon seeking the delay until after the November election. That’s when the state’s voters will likely decide a proposed constitutional amendment to limit marriage to opposite-sex couples. ‘Permitting this decision to take effect immediately – in the light of the realistic possibility that the people of California might amend their constitution to reaffirm marriage as the union of one man and one woman – risks legal havoc and uncertainty of immeasurable magnitude,’ the filing states. A spokesman for San Francisco City Attorney Dennis Herrera said they would fight any delay in issuing the marriage certificates to gay couples. Lawyers for the city are expected to file a legal response next week.”

In related news, SF mayor Gavin Newsom reacted angrily to reports out of San Diego that the county might allow clerks there to refuse to perform same-sex marriages:

“On Wednesday, San Diego County Clerk Gregory Smith said he would consider allowing clerks to bow out of processing such marriages if they had moral or religions objections. ‘I was pretty shocked about all that, candidly, and pretty outraged,’ Newsom told Reuters in an interview. ‘This is a civil marriage that civil servants have a responsibility to provide, so for civil servants on religious grounds to start passing judgments, they, I think, are breaking the core tenet of what civil service is all about. I’ve got very strong religious beliefs. So now, all of a sudden, I don’t have to do certain things, even though that’s my responsibility as mayor?'”