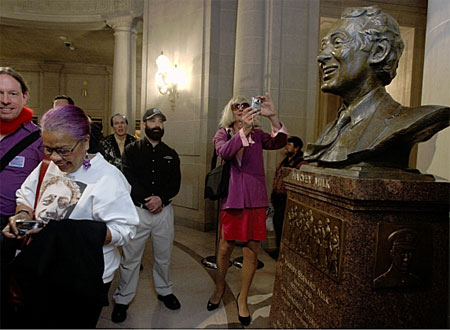 As promised, Harvey Milk’s bust was unveiled in San Francisco City Hall last night (the only bust of a non-mayor to have a place in the building). On its base is inscribed a quote from Milk recorded shortly before his death: “I ask for the movement to continue because my election gave young people out there hope. You gotta give ’em hope.”

Via the SF Chronicle: “Standing 75 inches high and weighing over 200 pounds, the sculpture also has three scenes depicted in relief on the base. One features Milk during his stint in the Navy, another shows him riding in a gay pride parade, and the last depicts the candlelight march held the night of the assassinations…The bust will stand in a ceremonial rotunda outside the Board of Supervisors chambers, a spot where couples frequently choose to get married. Manton said she expects the bust to be popular with City Hall visitors, especially now that California has legalized same-sex marriage.”

AFTER THE JUMP, watch a short videoblog by Luke Klipp which gives a brief tour of City Hall and shows the wrapped bust and its placement on the day before the unveiling…