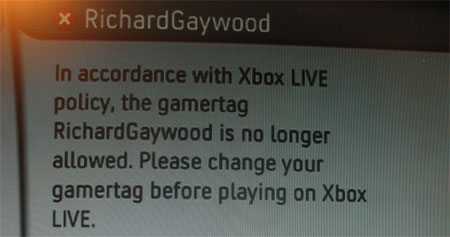 In last Friday’s tech column, I noted that Microsoft had banned a gamer from Xbox Live for using the gamer handle “theGAYERgamer”, apparently because it has the word “gay” in it.

Today, Kotaku reports that the homosexual ‘cleansing’ continues. They’ve also banned “RichardGaywood”, an Xbox Live player from the UK, who is actually using his real name.

Microsoft explained the ban on “theGAYERgamer” last week: “We recieved a complaint on the Gamertag and determined that it did indeed contain sexual innuendo. Now granted, there could be an argument that the text is not pejorative to homosexuality and should therefore be allowed. But there is no context to explain that. Gamertags are visible to everyone and it would be hard for me to defend to a parent of a young child who saw it that the name did not contain content of a sexual nature.”

Related
Does Gaming Turn You On? [tr]