The last resort on a “dried up” pop star’s list, according to The Scotsman: 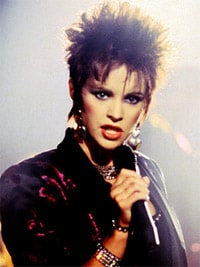 “The Scottish singer has sold more than 20 million records around the world in a career which has spanned three decades – but recently the hits have dried up and she is without a major record deal. Now the Grammy-winning 48-year-old is making a comeback and is counting on the power of the pink dollar to catapult her back to the big time. This summer Easton will top the entertainment bill on a prestigious gay-friendly cruise around the coast of North America. The ‘9 to 5’ chart-topper is also headlining Gay Pride events across the US – including a carnival at Palm Beach which is expected to attract a crowd of more than 100,000. Despite keeping a low profile in recent years, Easton has enjoyed a resurgence in popularity among sections of the gay community in the States, where her kitsch Eighties hits and sassy style are venerated.”

Folks in her home country aren’t too impressed.

Said Steven Taylor, the producer of Glasgay!, Scotland’s biggest gay festival: “As far as I’m concerned she is pretty much a washed-up has-been. We have a very young funky audience who, to be frank, are into much cooler acts than Sheena Easton. The idea that we would ask her to come back and perform in Glasgow is completely laughable. Gay audiences do love their ageing divas, but I think Sheena Easton is pushing things too far. In Scotland straight and gay audiences both tend not to like people who go away, change their accent and lose complete touch with their roots. I’m very sorry, Sheena, but your invitation to come back to Glasgow is not likely to be sent out any time soon.”

AFTER THE JUMP, a couple blasts from the past…