Earlier this month, I posted about University of Toledo associate vice president of human resources Crystal Dixon, who was suspended after writing an article in the Toledo Free Press slamming gays. Late last week, UT decided to fire her. 13ABC interviewed Dixon on Friday, about an hour after she was let go, calling the decision a “lack of courageous leadership.” She also says she’s suing the university. 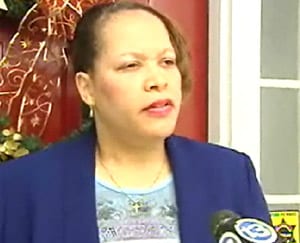 Said Dixon in the article, “As a Black woman … I take great umbrage at the notion that those choosing the homosexual lifestyle are civil rights victims. I cannot wake up tomorrow and not be a Black woman. Daily thousands of homosexuals make a life decision to leave the gay lifestyle.”

Said Dixon: “I have great faith. This is a far bigger picture than just Crystal Dixon….I have a wonderful, absolutely wonderful legal team. I have received hundreds of emails from across the country. Even received an email from Iceland, today. Basically encouraging me, basically telling me to stand strong…There are three issues – first of all, my right to free speech. Anyone has the freedom in this country to express their opinion as an individual. And secondly, clearly, religious discrimination, and also race discrimination at the very least.”

As for what she wants from the university, Dixon said: “We’re just going to see how this plays out.”