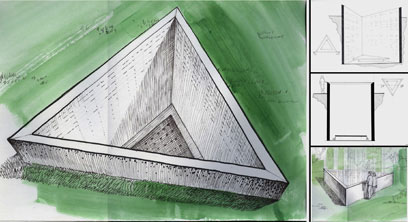 Tel Aviv Mayor Ron Huldai announced that Meir Garden in Tel Aviv is to be the site of a monument honoring tens of thousands of gay victims of Nazi persecution during World War II, Ynet reports:

“A quarter of a million homosexuals were persecuted during the Holocaust, and tens of thousands were murdered because the Nazi Party believed their sexual preference to be deviant. In the concentration camps in which they were imprisoned, gay men were forced to wear a pink triangle while lesbian women wore a black patch. Plans for the monument’s erection were initiated by Itai Pinkas, one of the homosexual community leaders and a member of the Tel Aviv Municipality City Council, who serves as the mayor’s advisor in matters of the gay community. The monument is to be the first in Israel to commemorate these victims, though four of its kind exist worldwide, in Sydney, Copenhagen, Berlin, and Amsterdam. It has been designed as an iron triangle, on which the victims’ names are to be inscribed.”

Above is a sketch of the proposed monument.