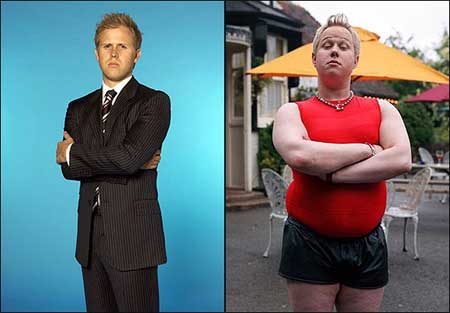 Kevin Shaw, the latest contestant to be kicked off the UK version of The Apprentice, has apparently been mocked for years for looking like the Matt Lucas Little Britain character Daffyd, or as he is better known, ‘The Only Gay in the Village’.

And he has a sense of humor about it.

Says Shaw: “I have no problem with the comparison and if someone wanted me to dress up as Matt for a charity event, I’d do it. As long as it was for a laugh I’d be game. I think it’s really funny – I even brought a Daffyd mask along when I went on the follow-up show, You’re Fired! It’s been going on for years and I often start the mickey-taking myself. Matt is one of the greatest comics this country has produced for years so it’s hardly an insult.”