Christopher Ciccone reportedly has a memoir coming in July from Simon & Schuster. 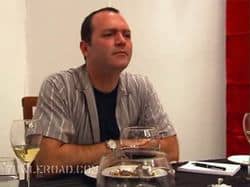 The AP reports: “‘Life With My Sister Madonna’ will have a first printing of 350,000. Financial details were not disclosed. ‘Ciccone’s extraordinary memoir is based on his life and 47 years of growing up with and working with his sister — the most famous woman in the world,’ the publisher said Wednesday in a statement…Ciccone will work with Wendy Leigh, who has written biographies of Liza Minnelli and Grace Kelly and a highly critical book about Arnold Schwarzenegger. Ciccone, 47, has worked often with his older sister, designing and directing her ‘Girlie Show’ tour in 1993 and serving as artistic director of her 1991 documentary, ‘Madonna: Truth or Dare.’ But according to Madonna’s spokeswoman, Liz Rosenberg, they are no longer close.”

AFTER THE JUMP, a clip from back in 1984 featuring Christopher performing with Madonna on French TV…