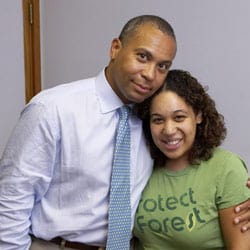 Said Katherine: “As private of an issue as it is, we’ve sort of had to come to terms with the fact that we are a public family and there you give a part of yourself away…And we also … wanted people to know that it’s not only something that we accept, but it’s something that we’re very proud of. It’s a great aspect of our lives and there’s nothing about it that is shameful or that we would want to hide. … And I’ll always remember the first thing my dad did was, [he] wrapped me in a bear hug and said, ’Well, we love you no matter what.’””

Bay Windows reports: “Patrick is the first elected official in the country to win statewide office after having campaigned on support for marriage equality. He spent a significant amount of political capital on the defeat of the marriage amendment, meeting privately with more than a dozen wavering legislators, strategizing with legislative leaders and publicly discussing why he supported marriage equality and why he thought the amendment should be defeated. But he says that the notion that one of his daughters could be gay didn’t factor into his advocacy on the issue. ‘I don’t think we thought about who they loved – more that they knew what love was and that they would have love in their lives,’ he explains. ‘You know, it’s interesting even just thinking about having this interview. Katherine and Diane and I and her aunt and Sarah were all talking about, you know, would we give an interview to announce one of our kids was straight? It’s just not about the public … it’s just about making sure that they had the fullness of their personality and their humanity…Fault me for not getting it,’ the governor adds. Then he reveals when he got the first inkling that his daughter might be gay: ‘I think when Katherine started to memorize all the episodes of The L Word, there was some hint that maybe she was sending us.'”

Watch a clip of Patrick speaking to the crowd on July 14, 2007, following the failure of the proposed amendment banning gay marriage, AFTER THE JUMP…

With love and pride [bay windows]

Previous Post: « Towleroad Guide to the Tube #306: John McCain Edition
Next Post: A Look at Andy Roddick at the Queens Club »