Calling it the “most robust measure” done of the differences in brain architecture and activity between gay and straight people, a Swedish researcher reports that gay people show striking similarities in brain structure and activity to heterosexual people of the opposite sex: 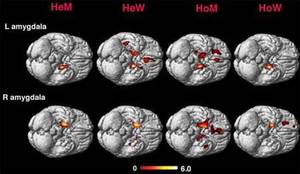 “First they used MRI scans to find out the overall volume and shapes of brains in a group of 90 volunteers consisting of 25 heterosexuals and 20 homosexuals of each gender. The results showed that straight men had asymmetric brains, with the right hemisphere slightly larger – and the gay women also had this asymmetry. Gay men, meanwhile, had symmetrical brains like those of straight women. The team next used PET scans to measure blood flow to the amygdala, part of the brain that governs fear and aggression. The images revealed how the amygdala connected to other parts of the brain, giving clues to how this might influence behaviour. They found that the patterns of connectivity in gay men matched those of straight women, and vice versa (see image, above right). In straight women and gay men, the connections were mainly into regions of the brain that manifest fear as intense anxiety. ‘The regions involved in phobia, anxiety and depression overlap with the pattern we see from the amygdala,’ says Savic. This is significant, she says, and fits with data showing that women are three times as likely as men to suffer from mood disorders or depression. Gay men have higher rates of depression too, she says, but it’s difficult to know whether this is down to biology, homophobia or simply feelings of being ‘different’.”

New Scientist calls it “the most compelling evidence yet” that sexuality is a biologically fixed trait.

Previous Post: « Towleroad Guide to the Tube #309
Next Post: HRC Responds to Accusations of Candidate Bias During Primaries »