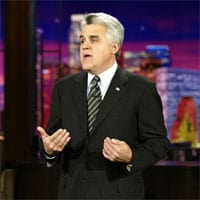 Jay Leno, who in April found himself the focus of criticism after an episode of The Tonight Show in which he asked actor Ryan Philippe to look at the camera and give it his “gayest look”, is set to appear in support of California’s same-sex marriage decision at tonight’s symbolic mass commitment ceremony in West Hollywood, according to E!’s Marc Malkin:

“The Tonight Show host decided to make an appearance in support of the recent legalization of gay marriage by California’s Supreme Court. ‘He said that he is from Massachusetts and that the sky did not fall in their state when marriage equality became the law of the land there,’ a rep for the event said. ‘He wants to impress upon everyone here in California that the sky will not fall here either.'”