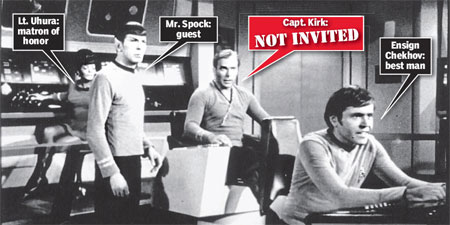 Star Trek actor George Takei gave People some of the details on his upcoming marriage to 21-year partner Brad Altman: “…they’ve already settled on a few things that reflect their eclectic taste as well as their respective backgrounds. Scottish bagpipes will play during the ceremony and a Mexican-American Buddhist minister will officiate. They’ve ordered matching Native American turquoise and silver rings. And the wedding dinner will feature fusion Japanese-Mexican cuisine.” 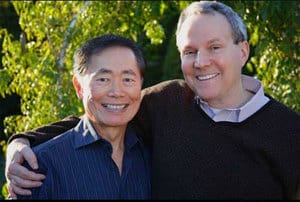 Added Takei: “We knew that the (California State) Supreme Court was going to be coming down with their ruling. (We’d heard) that it was probably going to be positive. So I was planning on asking Brad to get married. We were at home in the kitchen and we had the TV going, and when the word came down suddenly Brad got on his knees in front of me. And I said, ‘What are you doing?’ He said, ‘George, will you marry me?’ I said ‘Yes. You beat me to it. I meant to ask you.'”

The wedding party will be populated with fellow Star Trek actors: The best man is my colleague from Star Trek, Walter Koenig, who played Chekov, and the matron of honor is (Lt.) Uhura, Nichelle Nichols. And Leonard (Nimoy) and his wife Susan are on the (guest) list.”

Captain Kirk has apparently been left off the guest list: “‘We have only 200 seats,’ Altman told AP radio this week. ‘Our contact list has, like, 3,500 names, so we have to whittle it down and I don’t know if William Shatner is going to make the cut.’ The couple diplomatically recounted ‘Sulu’s’ longtime beefs with Shatner. ‘He’s a wonderful actor. No one could have created the character Capt. Kirk the way he brought his singular metabolism to the character,’ said Takei. Then he added, ‘Kirk and Shatner both have this grand ego of sense of self. He sits there in the center of the set and he revels [in] it.’ Takei said he was continually miffed with Shatner for pressuring directors to do close-ups of Capt. Kirk, even when the dialogue focused on other characters. ‘One or two times, you know, is fine,’ said Takei. ‘But when it happens almost regularly, it gets to be a little irritating.’ Shatner and his manager did not return messages seeking comment yesterday.”