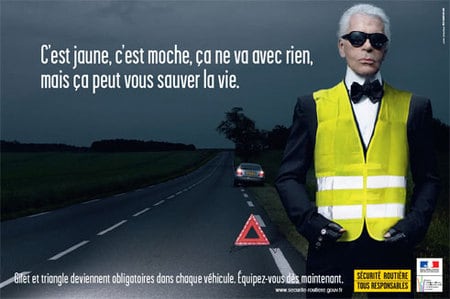 Karl Lagerfeld dons a reflective yellow vest for a new French road safety campaign, declaring, “It’s yellow, it’s ugly, it doesn’t match anything, but it can save your life.”

According to Bloomberg, “Lagerfeld agreed to pose in the shapeless protective apparel as part of a French government safety-awareness campaign, which was kicked off yesterday. The vest and a reflective triangle will become mandatory for all drivers and cyclists on July 1. The number of traffic deaths in France jumped 10 percent to 346 in May, the highest since the beginning of the year, the Ministry of Environment said on its Web site. Two cyclists have died in Paris since the introduction of free municipal bicycles last year.”