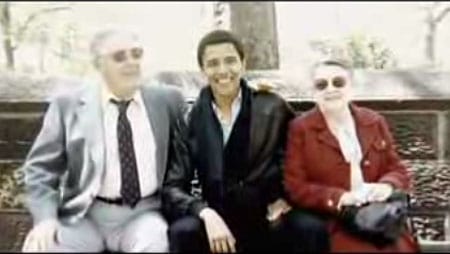 AmericaBlog notes: “Bush won fourteen of the states on that list — all except Michigan, New Hampshire, Pennsylvania and Wisconsin. Those other fourteen have been red states — John McCain really, really needs to win all of them. This year, they’re all in play.”

“America is a country of strong families and strong values. My life’s been blessed by both.

“I was raised by a single mom and my grandparents. We didn’t have much money, but they taught me values straight from the Kansas heartland where they grew up. Accountability and self-reliance. Love of country. Working hard without making excuses. Treating your neighbor as you’d like to be treated. It’s what guided me as I worked my way up – taking jobs and loans to make it through college.

“It’s what led me to pass up Wall Street jobs and go to Chicago instead, helping neighborhoods devastated when steel plants closed.

“That’s why I passed laws moving people from welfare to work, cut taxes for working families and extended health care for wounded troops who’d been neglected.

“I approved this message because I’ll never forget those values, and if I have the honor of taking the oath of office as President, it will be with a deep and abiding faith in the country I love.”