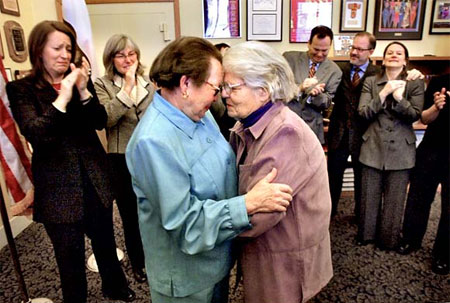 Del Martin and Phyllis Lyon, together for more than 50 years, were the first couple to marry in San Francisco in 2004, and Mayor Gavin Newsom plans to allow them the same honor this year.

In fact, they will be the only couple married in San Francisco City Hall after 5pm on June 16th. Others who wish to be married at SF City Hall will have to wait until the 17th.

Said Newsom: “What we want, the narrative coming out of it, is about them and what they represent – their story, their history. This is really where it all started.”

The SF Chronicle reports: “The photograph of Lyon and Martin’s wedding, at which Newsom officiated at City Hall, has been credited by some as being an iconic image that has influenced how people across the country perceive same-sex marriage. The two also were plaintiffs in the recent case in which the state Supreme Court ruled same-sex marriage legal…Lyon and Martin first met in Seattle in 1950 and moved in together in a Castro Street apartment on Valentine’s Day 1953. Two years later, Lyon and Martin, and three other lesbian couples founded the Daughters of Bilitis, which historians call the first lesbian organization in the United States. Lyon and Martin have been leaders of the lesbian community ever since.”