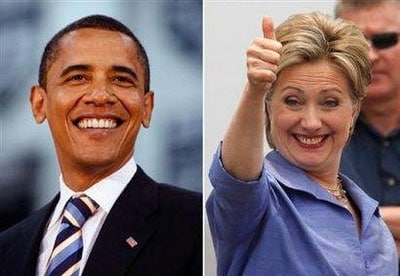 AP: Obama clinches nomination. “Barack Obama effectively clinched the Democratic presidential nomination Tuesday, becoming the first black candidate to lead a major party into a campaign for the White House. Vanquished rival Hillary Rodham Clinton swiftly signaled an interest in joining the ticket as running mate. Obama arranged a victory celebration at the site of this summer’s Republican National Convention — an in-your-face gesture to Sen. John McCain, who will be his opponent in the race to become the nation’s 44th president.”

Clinton said to be open to VP slot. ” Rep. Charles Rangel, a senior member of the New York Democratic delegation, also told CNN, ‘I have reason to believe she is open to the [vice president] slot.’ One of the sources added that former President Clinton has been privately pushing for a couple of weeks for his wife to be No. 2 on the ticket.”

Jimmy Carter to endorse Obama after polls close. Carter: “I’m a superdelegate. I think a lot of the superdelegates will make a decision quite, announced quite rapidly, after the final primary on June 3…I have not yet announced publicly, but I think at that point it will be time for her to give it up.”