David Beckham was accosted by a male fan at an L.A. Galaxy-Colorado Rapids match-up yesterday. After grabbing Beckham and being thrown to the field the fan was knocked down by teammate Chris Klein, and taken away by security shortly thereafter.

Said Beckham: “I was slightly concerned when I first saw him running at me because he didn’t have a smile on his face and he didn’t have a Galaxy shirt on. So I didn’t know if he was going to come and give me a hug or something else. These things happen in games all over the world. Luckily, he just wanted to give me a high five and that was the end of it.”

Watch the clip (incident happens at very end), AFTER THE JUMP… 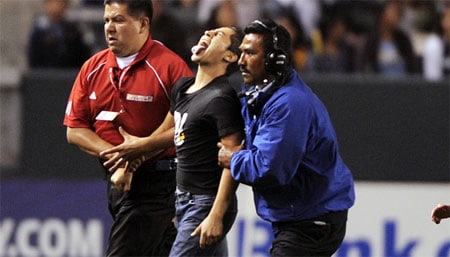