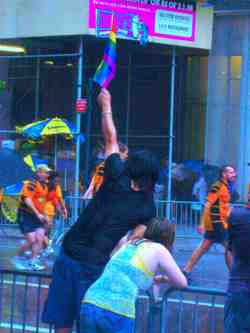 On my own blog, I tend to be wordy. So of course I’m taking over Towleroad the day after Gay Pride Weekend. It’s impossible to summarize multiple events across the world too briefly, so my first couple of posts, devoted to Pride, will be anything but the lighter fare Andy promised from me.

Over one million turned out to watch approximately 500,000 march in New York City’s annual Gay Pride Parade, the 39th celebration since the Stonewall Riots (June 28, 1969). Intermittent showers soaked the throngs of participants and spectators, failing to dampen enthusiasm even as more than one pair of size 12 Prada pumps had their last hurrah.

“Politically and personally, thank you to Governor Paterson. What he did following on the great work in the assembly—sends a message that leadership isn’t about waiting, it’s about finding the opportunity. It’s about finding the way to move progress and civil rights forward.”

My own experience with the stormy NYC parade? Put away wet, but not rode hard… 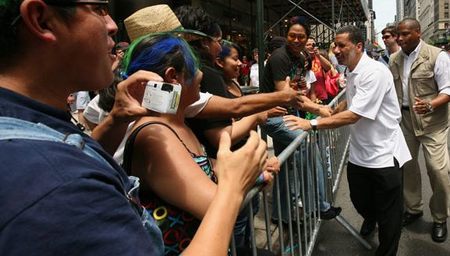