Bishops assembled at the Lambeth Conference have debated the creation of a body to be headed up by Archbishop of Canterbury Rowan Williams that would enforce moratoriums on gay consecrations, same-sex blessings and cross-border interventions, wherein “conservative bishops from Africa have consecrated bishops to pastor congregations in the United States.” 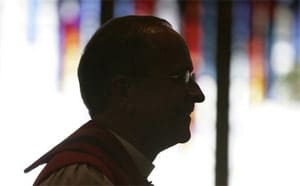 According to the Times Online, “The plan was drawn up by a group of bishops at the conference, who say in the document: ‘We believe that the pastoral forum should be empowered to act in the Anglican Communion in a rapid manner to emerging threats to its life.'”

Here’s the gist of it however: “The document says the moratoria asked for on a number of previous occasions are to be understood as ‘retrospective’. The strong implication of this is that the openly-gay Bishop of New Hampshire, Gene Robinson, must resign if the Anglican church is to survive as one body. However, this is not stated explicitly and conservatives criticised the document as lacking teeth.”