An arrest has been made in the murder of Angie Zapata, a transgender woman who was beaten to death last week in her home in Greeley, Colorado: “Alan Ray Andrade, 31, was arrested in Thornton on Tuesday and faces second-degree murder and aggravated motor vehicle theft charges.” 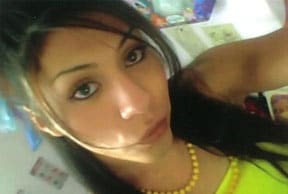 Andrade gave an affadavit to police, which was provide to Colorado’s 9NEWS: “The affidavit says Andrade met Zapata on a social networking site, Mocospace, and the two arranged to meet July 15. Zapata picked Andrade up in Thornton where he lived and the pair returned to Zapata’s Greeley apartment together. Andrade told police Zapata performed a sexual act on him. The following day, the affidavit explains, Andrade started to look at photos in the apartment and questioned Zapata’s sex. That night, Andrade questioned Zapata directly, according to the affidavit, and Andrade says Zapata responded, ‘I’m all woman.’ Andrade told police he grabbed Zapata in her genital area and felt a penis. He became angry and hit Zapata with his fist before grabbing a fire extinguisher and hitting her in the head twice, according to the affidavit. Andrade explained to police that he thought he ‘killed it,’ referring to Zapata but when she made gurgling noises and started to sit up, he hit her with the extinguisher again. He also admitted to police that he stole Zapata’s car and drove away.”

Zapata was found by her sister on July 17. Last week her sister pleaded for help from the community: “We want to get the whole community involved to find this person who hurt my sister and to let everyone be aware that all she wanted was to be beautiful. We want this violence to end. Transgender people deserve to be treated with respect.”