The California Supreme Court has rejected a bid from gay and civil rights groups to remove Proposition 8, the measure that would limit marriage in the state to a man and a woman, from the November ballot: 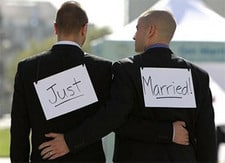 “Meeting in closed session, the court denied a petition calling for the removal of the initiative, Proposition 8, on the grounds it was a constitutional revision that only the Legislature or a constitutional convention could place before voters. Gay rights lawyers also argued that petitions circulated to get the measure on the ballot inaccurately summarized its effect. The court, meeting at its regular weekly conference, denied the petition without comment in a brief order.”