were published over the weekend in the Mail on Sunday (along with some never-before-seen photos, including the one above, right), most of which dealt with Guy Ritchie’s homophobia and how it came between Christopher and Madonna. Here’s a bit where Christopher exacts a bit of verbal revenge on Guy after feeling like the butt end of Guy’s homophobic jokes while at Scotland’s Skibo Castle for their wedding: 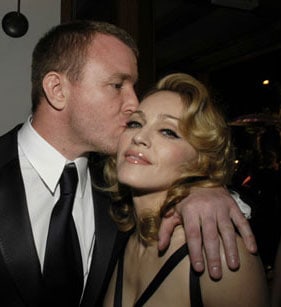 Madonna stands up at the top of the table and issues the instruction: ‘Christopher, tonight it’s your turn to give the toast.’

I lean down the baronial table and, with great emphasis, reply: ‘Madonna, you really don’t want me to do that.’ It’s a statement, not a question.

‘No, Christopher, it’s your turn!’ she barks in a tone identical to the one she always used as a kid when she and my siblings all played Monopoly together.

If she didn’t get Park Place [Mayfair in the English version] she invariably stamped her feet and said: ‘But it’s mine.’ In those days, in the face of her strong will, I always capitulated and rescinded my purchase of Park Place.

Nothing seems to have changed. I stand up. My fellow guests fall silent out of respect – the brother of the bride is about to make a speech. I raise my glass: ‘I’d like to toast this happy moment that comes only twice in a person’s lifetime.’

Everyone erupts in laughter. Everyone, of course, except Madonna, who keeps saying: ‘What did he mean?’ Guy, who I suspect knows exactly what I mean, says nothing and avoids looking at me.

Soon after, Trudie [Styler] tells me: ‘That was hysterical. I’ve been listening to all those homophobic jokes. I just want you to know that we were aware of how you must be feeling.’

Ciccone also appeared this morning on Good Morning America. You can watch that, AFTER THE JUMP…

Previous Post: « Former Aussie Olympian Ian Thorpe in Love with Someone
Next Post: Archbishop of Wales Says He Would Consecrate a Gay Bishop »