John McCain has backtracked on a statement to the New York Times over the weekend on whether or not same-sex parents should be allowed to adopt children. Said McCain to the paper: “I think that we’ve proven that both parents are important in the success of a family so, no, I don’t believe in gay adoption.” 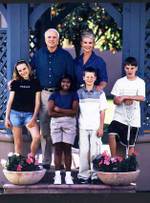 The remarks were criticized by PFLAG which responded with research to the contrary.

“McCain could have been clearer in the interview in stating that his position on gay adoption is that it is a state issue, just as he made it clear in the interview that marriage is a state issue. He was not endorsing any federal legislation. McCain’s expressed his personal preference for children to be raised by a mother and a father wherever possible. However, as an adoptive father himself, McCain believes children deserve loving and caring home environments, and he recognizes that there are many abandoned children who have yet to find homes. McCain believes that in those situations that caring parental figures are better for the child than the alternative.”