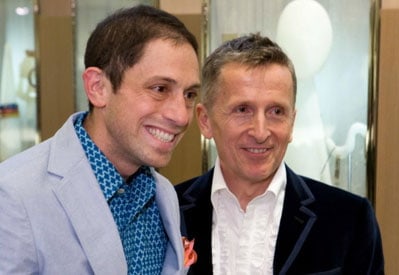 Barney’s New York creative director Simon Doonan and designer Jonathan Adler will be tying the knot in California in mid-September according to New York magazine’s The Cut.

Said Doonan: “I always thought we were married, so I don’t feel like celebrating the fact that the government’s allowing me to think I’m married. It’s more like paying a parking ticket. We’ll have a nice romantic dinner, him and me. [Adler’s mom Cynthia and sister Amy] have been incredibly supportive and kept an eye out on what was going on, and they said, ‘Oh, you guys should get married in California.’ So it was them that sort of prompted us…But no gifts. We have enough tchotchkes at home for one lifetime.”