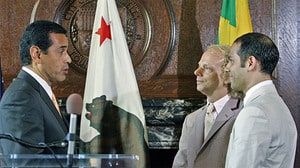 “The Human Rights Campaign is one of the nation’s most prominent gay rights organizations and the Washington-based group already has given over $500,000 to defeat the same-sex marriage measure. But many transgender activists and their allies have been angry at the group since the fall, when its leaders agreed to support a federal job discrimination ban that protected gays, lesbians and bisexuals – but not transgender people. Matt Szabo, Villaraigosa’s spokesman, said the mayor’s decision was more a byproduct of the Human Rights Campaign controversy than a snub of the group itself. When Villaraigosa agreed to appear at the dinner at the Westin St. Francis Hotel, he was unaware that the San Francisco Labor Council had urged its members to boycott the event, which would have put the Democratic mayor, who is mentioned as a possible 2010 gubernatorial candidate, in the position of having to cross a union picket line, according to Szabo.”