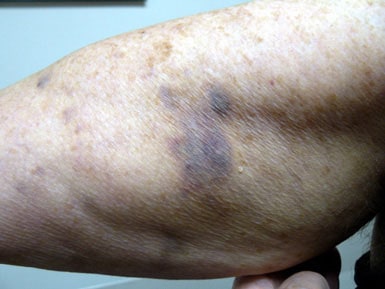 Catherine Cusic, a 63-year-old lesbian who bought a ticket to the Human Rights Campaign dinner in San Francisco on Saturday night, said she stood up to begin distributing material (presumably in protest of the HRC’s position on ENDA) during President Joe Solmonese’s speech. She says she was then manhandled by securited who threw her out:

“At this point 2-3 large men accosted me. I don’t remember their exact words but I quietly said that I had bought a ticket and had the right to be there. I began to place printed material on a table when I was grabbed roughly by at least 2 men (who I think were behind me). One of them put my right arm in an armlock behind my back and up and bent my right wrist with tremendous force. I was also held by both arms (with force enough around both upper arms that I had bruises within 20 minutes). At some point I was knocked to the ground and dragged out of the dining area into the outer room where they lifted me to my feet but did not let go. I then said to them: “let me go, I will leave.” (We were walking to a stairwell). They did not let go and dragged me off my feet again and down the stairs to the exit on Post street.”

Cusic says she has also been ejected from the St. Francis (by SF police) but is accusing the private security hired by HRC of excessive force.