John McCain would rather children suffer without families rather than have gay parents adopt them. In an interview with George Stephanopolous on This Week, McCain, who recently said he was against gay adoption, then backtracked on it, is now back to his original position. 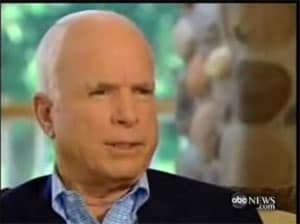 MCCAIN: My position is, it’s not the reason why I’m running for president of the United States. And I think that two parent families are best for America.

STEPHANOPOULOS: Well, what do you mean by that, it’s not the reason you’re running for president of the United States?

MCCAIN: Because I think — well, I think that it’s — it is important for us to emphasize family values. But I think it’s very important that we understand that we have other challenges, too. I’m running for president of the United States, because I want to help with family values. And I think that family values are important, when we have two parent — families that are of parents that are the traditional family.

STEPHANOPOULOS: But there are several hundred thousand children in the country who don’t have a home. And if a gay couple wants to adopt them, what’s wrong with that?

MCCAIN: I am for the values that two parent families, the traditional family represents.

STEPHANOPOULOS: So, you’re against gay adoption.

MCCAIN: I am for the values and principles that two parent families represent. And I also do point out that many of these decisions are made by the states, as we all know. And I will do everything I can to encourage adoption, to encourage all of the things that keeps families together, including educational opportunities, including a better economy, job creation. And I’m running for president, because I want to help families in America. And one of my positions is that I believe that family values and family traditions are preserved.