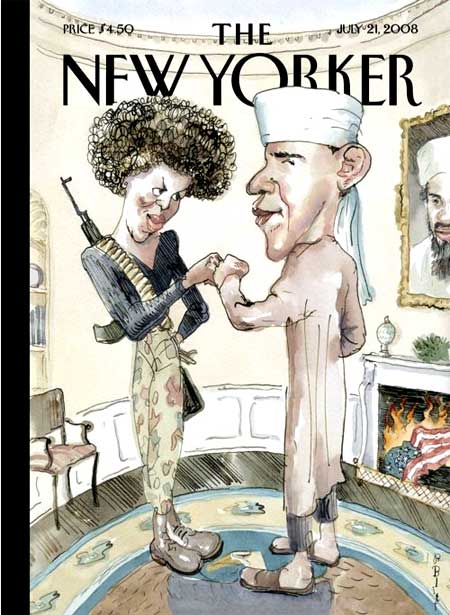 The New Yorker‘s cover of Barack and Michelle Obama in Muslim/terrorist garb in the Oval Office has generated a not surprising bundle of controversy. The magazine explained it in a press release: “On the cover of the July 21, 2008, issue of the The New Yorker, in ‘The Politics of Fear,’ artist Barry Blitt satirizes the use of scare tactics and misinformation in the Presidential election to derail Barack Obama’s campaign.”

You may remember that Barry Blitt, who did the cover, also drew the cover of Iranian President Mahmoud Ahmadinejad and his “narrow stance” satirizing the Larry Craig scandal.

Obama campaign spokesman Bill Burton said: “The New Yorker may think, as one of their staff explained to us, that their cover is a satirical lampoon of the caricature Senator Obama’s right-wing critics have tried to create. But most readers will see it as tasteless and offensive. And we agree.” 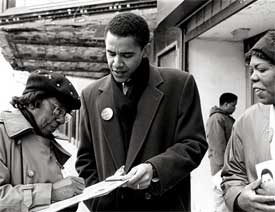 Obama himself was asked about the cover:

NBC’s ATHENA JONES: “The upcoming issue of the New Yorker, the July 21st issue, has a picture of you, depicting you and your wife on the cover. Have you seen it? If not, I can show it to you on my computer. It shows your wife Michelle with an Afro and an AK 47 and the two of you doing the fist bump with you in a sort of turban-type thing on top. I wondered if you’ve seen it or if you want to see it or if you have a response to it?

OBAMA: “Obama (shrugs incredulously): ‘I have no response to that.'”

The McCain campaign agreed: “We completely agree with the Obama campaign, it’s tasteless and offensive.”

Blitt defended his cover: “I think the idea that the Obamas are branded as unpatriotic [let alone as terrorists] in certain sectors is preposterous. It seemed to me that depicting the concept would show it as the fear-mongering ridiculousness that it is.” Asked whether he regrets it, Blitt responded: “The magazine just came out ten minutes ago, at least give me a few days to decide whether to regret it or not…”

And, if anyone is interested, here’s the lengthy article about Obama in this week’s issue (photo above from that article)…