Last Friday I posted about a teen in Anderson, South Carolina, now identified as Dwight Clark Ables, who had allegedly returned home from a gay pride festival to be attacked with a baseball bat by his father. 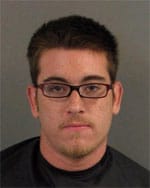 The Independent Mail reported that “the battering took place about 1 p.m. Sunday on P Street. During the assault, the teen’s 49-year-old father yelled, cursed, swung the bat, prayed and tried to ‘cast the demon of homosexuality out of him,’ according to the teen’s version of events to Deputy S.C. Weymouth…”

Turns out there was no evidence to support the teen’s claims and he is now in custody for filing a false report, according to Q-Notes:

“‘After conducting a thorough investigation and the lack of any forensic evidence to support the allegation of the assault, Dwight Clark Ables has been charged with 1 count of Filing a False Police report. He turned himself in today at the Anderson County Sheriff’s office,’ read a press release from the Department’s Public Information Officer Suzanne Griffin. Ables is currently being held at the Anderson County Detention Center where he awaits a bond hearing.”