Last Saturday I flew from Provincetown to Boston to JFK. It was a routine flight. Cape Air arrived in Boston about 20 minutes late and my partner Dave and I walked 100 feet from our arrival gate to our JetBlue departure gate. The gates were so close that given the opportunity I could have walked my luggage to our next plane myself. Everyone on our flight had already boarded and the JetBlue flight actually left early. It was clear that the flight had left so quickly that our luggage wouldn’t make it on the plane. 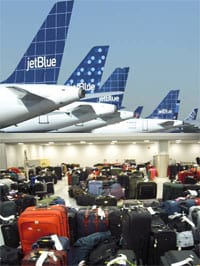 Unfortunately, it’s been FIVE days and my luggage is still missing. Every item I wear on a weekly basis was in that bag along with more than a few sentimental items. Dave’s was lost too but his arrived 36 hours later.

When I called the JetBlue luggage office in the initial hours my bag had gone missing and asked them if they had logged the barcode tag on my luggage and were tracking it I was told that “JetBlue is too cheap to have a luggage tracking system” and that everything is done manually, so there’s no way to track it.

Unfortunately, the manual system doesn’t work either. Three calls a day for five days to the JetBlue JFK office and I don’t believe I spoke to the same person twice. I also don’t believe anybody gave a damn about me or my bag. The standard answer was, ‘well, we’ll just see if it comes in on the next plane!’

I’m also aware that it could be Cape Air’s system (I’ve placed calls there too, with little luck) my bag could be lost in, but the airlines are partners and JetBlue is ultimately responsible for the follow-up.

Now my case has been transferred to the ‘Central Baggage Service’. Oh joy. I get to start filling out a claim form, for which they want original receipts for the items that were in the bag!

I am confident my bag is out there. If there’s anyone at JetBlue reading this that knows how to get some action on my lost bag, contact me! Until then, I’ll be flying elsewhere and WARNING others to do so as well. Or at least have a good prayer ready when their bag gets lost.

Apologies for breaking from the regularly scheduled programming here, but I’m in a bad way.