A spokesman for the Alabama Governor’s office has denied that Alabama Attorney General Troy King is preparing to resign as rumors swirl of an explosive scandal involving King, his wife, and a male aide: 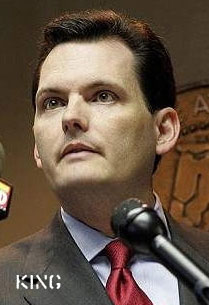 “The word is, according to multiple sources in Montgomery and elsewhere, that King was recently caught by his wife in a gay affair with a male aide and banished from his home. According to Tara Hutchison in the executive office of the governor they have heard of no plans in the works for King’s resignation. She said she had not heard that he had been kicked out of his home because of a gay affair. Governor Bob Riley’s press office had refused to return multiple phone calls from this independent press outlet even though some sources accuse Riley of perpetrating the leak. The attorney general’s press office also declined to return phone calls seeking comment.”

King is apparently a big homophobe who called homosexuality “the downfall of society” in a 1992 editorial in the U. of Alabama’s Crimson White. No details as of his anti-gay efforts since then but it’s not likely he changed. More on his positions at the end of this post.

Left in Alabama writes: “I’m almost sorry to see him go — Troy was like a caricature of the Republican party. Never met a death sentence he didn’t like, against sexual gratification, publicity hound, etc. … life as an Alabama blogger will be harder without Troy King.”

Previous Post: « A Warning About JetBlue and Why I’ll Likely Never Fly it Again
Next Post: McCain, Obama React to Phil Gramm Remarks on Recession »