In a bit of curious timing coming shortly after the close of the Anglican church’s Lambeth conference, correspondence from the church’s leading archbishop Rowan Williams to an evangelical Christian has surfaced. In it, Williams says that same-sex relationships may be comparable to those of married couples in the eyes of God: 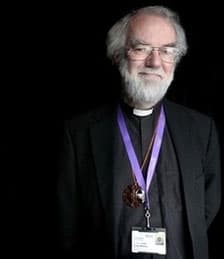 “In a series of letters from 2000 and 2001, when he was still archbishop of Wales, Williams wrote that scriptural prohibitions against homosexuality, such as those in Leviticus, were addressed ‘to heterosexuals looking for sexual variety in their experience’. In the correspondence, an exchange with an evangelical Christian, Williams argued that passages criticising homosexual activity were not aimed at people who were gay by nature. ‘An active sexual relationship between two people of the same sex might therefore reflect the love of God in a way comparable to marriage, if and only if it had about it the same character of absolute covenanted faithfulness.’ He also expressed his optimism that the church might change its stance on homosexuality: ‘The church has shifted its stance on several matters, notably the rightness of lending money at interest and the moral admissibility of contraception, so I am bound to ask if this is another such issue.’ Publication of the letters comes days after Williams emerged unscathed from an important summit of the world’s Anglican bishops.”

The Times called it a “last ditch attempt to undermine” Williams’ position as mediator between two sides of the church, which has been split over its positions regarding gay and women clergy (more specifically the ordination of New Hampshire Episcopal bishop Gene Robinson), and the blessings of same-sex marriages.

Previous Post: « Brett Favre is a New York Jet
Next Post: Kanye West to Fans: Don’t Use the Word ‘Fag’ »